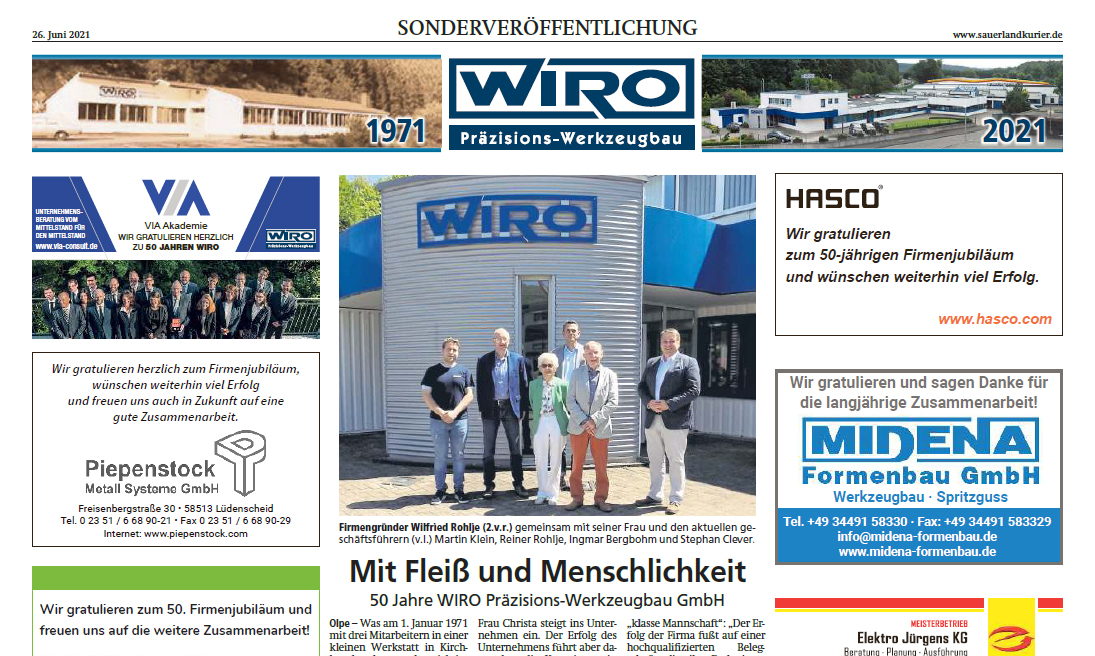 “For Wilfried Rohlje, there is only one language: the language of humanity . We can all take a leaf out of his book,” Ingmar Bergbohm, Stephan Clever and Martin Klein, together with Wilfried Rohlje’s son Reiner Managing Director at WIRO, are full of praise for the company founder. The story of the successful company began on a small scale in 1971.

According to his son, master moldmaker Wilfried Rohlje “doesn’t want to have a boss anymore ” and ventured into self-employment. So he looked for an investor – who was surprisingly his former boss Aloys Mennekes. Mr. Mennekes said: “There is no question of anyone else doing it,” Reiner Rohlje comments. Everything started with three employees in rented rooms in Kirchhundem. Most of the customers were from the surrounding area. Success was not long in coming – and this was followed by the first major investments: In 1977, the first injection molding machine was purchased, and in 1978 the still young company received its first foreign orders in cooperation with other injection molding machine manufacturers. The first participation in a foreign trade fair followed. The first molds for the production of closure components were built.

Even today, everyone has probably held parts in their hands that were created thanks to WIRO’s know-how: Among other things, shoulders and caps of toothpaste tubes are produced with the help of high-performance injection molds made by WIRO.

After Aloys Mennekes’ death, Wilfried Rohlje payed off the shareholders and his wife Christa joined the company. However, the success of the company meant that the capacities in Kirchhundem were no longer sufficient. And so on May 1, 1979, the company moved to its current location in Olpe. “Downstairs was the office and workshop and upstairs was where the family lived. The whole family always worked very hard – sometimes all night long. The alarm clock rang several times at night to change over the machines. There was no time for vacation,” recalls Reiner Rohlje.

In the beginning, there were no automatic machines, everything had to be done by hand – real craftsmanship. Reiner Rohlje himself followed in his father’s footsteps, completing his apprenticeship as a moldmaker in the family business in 1975 and becoming a master moldmaker and partner of WIRO GmbH in 1985. And the success story continued.

By participating in international plastics trade fairs, Wilfried Rohlje and the team established further contacts. “Wilfried Rohlje has had a decisive influence on this period, building synergies and relationships at the trade fairs. In doing so, he has also always responded to the different mentality of the people. Without his cosmopolitanism, we would not be where we are today,” says Stephan Clever, describing the founder’s influence on the company’s success.

This cosmopolitanism is also reflected in the WIRO company philosophy.

“WIRO is a company that is extremely human. Cohesion is very important to us, which is why we always deal with each other, customers and suppliers as equals,” says Reiner Rohlje.

The managing director is full of praise for his “first-class team”: “The success of the company is based on a highly qualified workforce that passes on its expertise from generation to generation. I can only take my hat off to that.”

Employees have been rewarded for this passionate commitment since the 1970s by receiving a bonus linked to the company’s business success. A pioneer in the social sector, WIRO was also one of the first companies to guarantee its employees a company pension, also since the 1970s.
Today, the company exports tools to five continents, with 70 percent of exports going to countries outside the EU. “We have created many jobs and brought many jobs to Germany,” says Reiner Rohlje. Currently, WIRO employs about 50 people. In addition, the company has given apprenticeships to more than 100 young people: “We are very proud of that.”

In 1987, 1998 and 2009, the company invested at the site in Olpe, built two new halls and also took over the neighboring building. State-of-the-art machines werepurchased.

In three participations in the renowned “Excellence in Production” competition, WIRO became overall winner twice (2006 and 2008) and reached the final again in 2010. Finally, in 2011, the patent for the “HotMove” technology was registered. With this tool concept, 2K, 3K and 4K articles could be produced more economically.

The future is also well taken care of. Reiner Rohlje wants to “slowly and smoothly” hand over the baton to the remaining three managing directors and co-partners Ingmar Bergbohm, Stephan Clever and Martin Klein. All three are long-time employees and real experts in the field of moldmaking.

And what does the son of the company founder personally wish for the future of the company? “No pain, no gain – that is the basis of the company. It must never be forgotten that there is no success without performance,” says Reiner Rohlje.